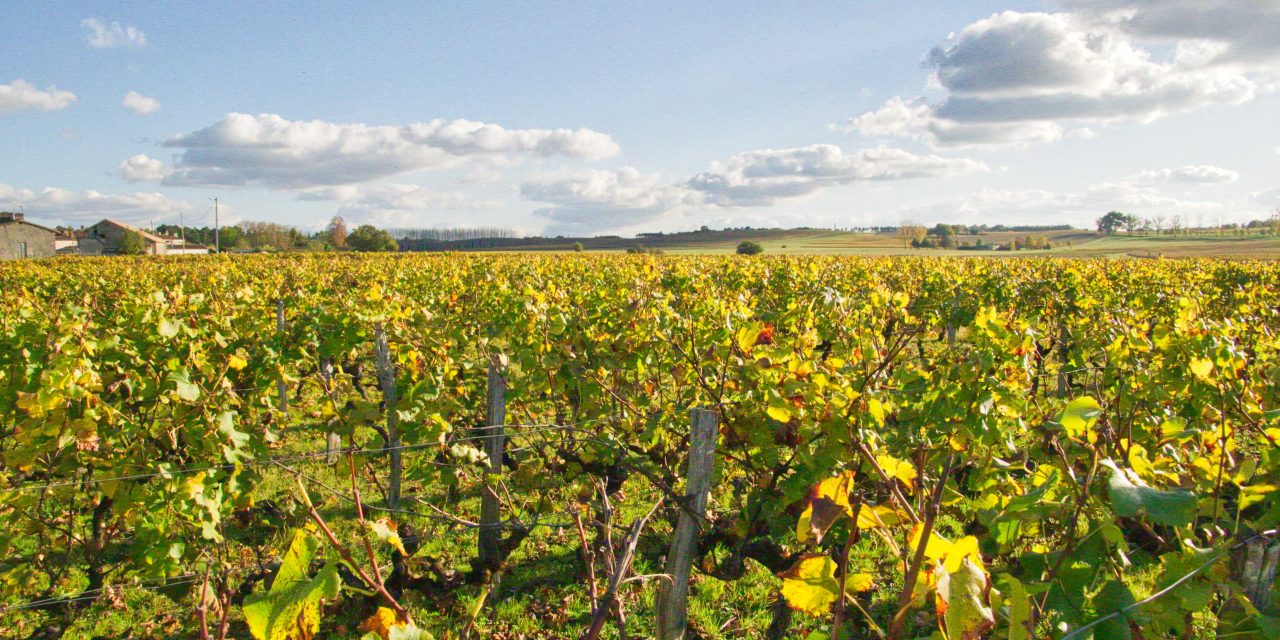 We sailed one of the world’s most acclaimed wine regions on three stunning rivers, the Garonne, the Dordogne and the Gironde.
Starting in Bordeaux, the “Pearl of the Aquitaine,” as the region is also known, in southwest France, to delightful Pauillac, the gateway to the Médoc wine route, and Saint-Émilion’s astonishing 12th-century Monolithic Church.
We tasted some Médoc vintages, visited the cellars of Premier Grand Cru in Saint-Émilion, and in Sauternes, meet the winemakers and enjoyed a wine-pairing lunch at Château de Cazeneuve. You can see more photos from trip here or from our photo gallery. 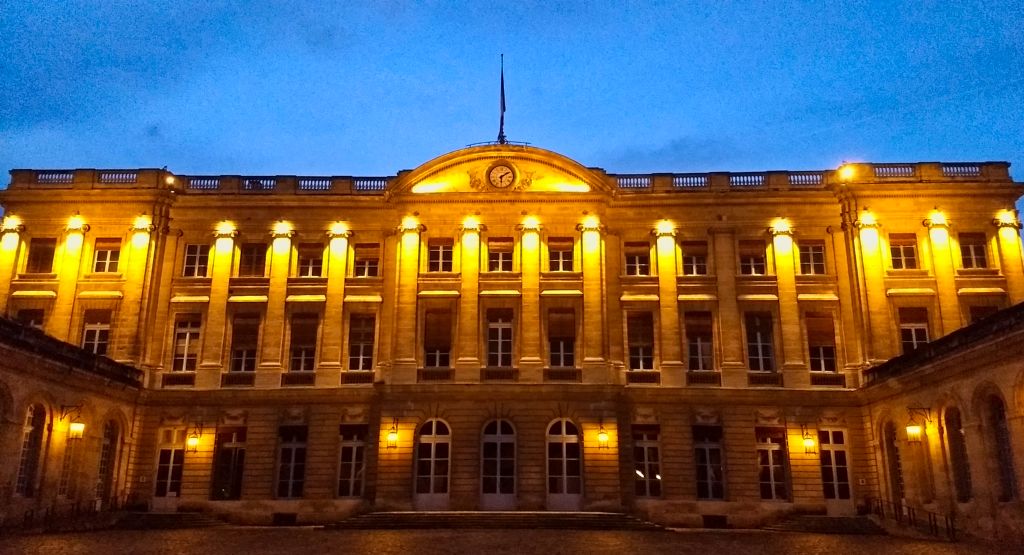 We arrived in Bordeaux the previous day and wondered about in the rain. The next day we headed for the ship which was docked right in the heart of the city. There were food markets on the promenade but alas it was also raining so we stayed on board and chatted with people and had lunch and dinner on the ship. 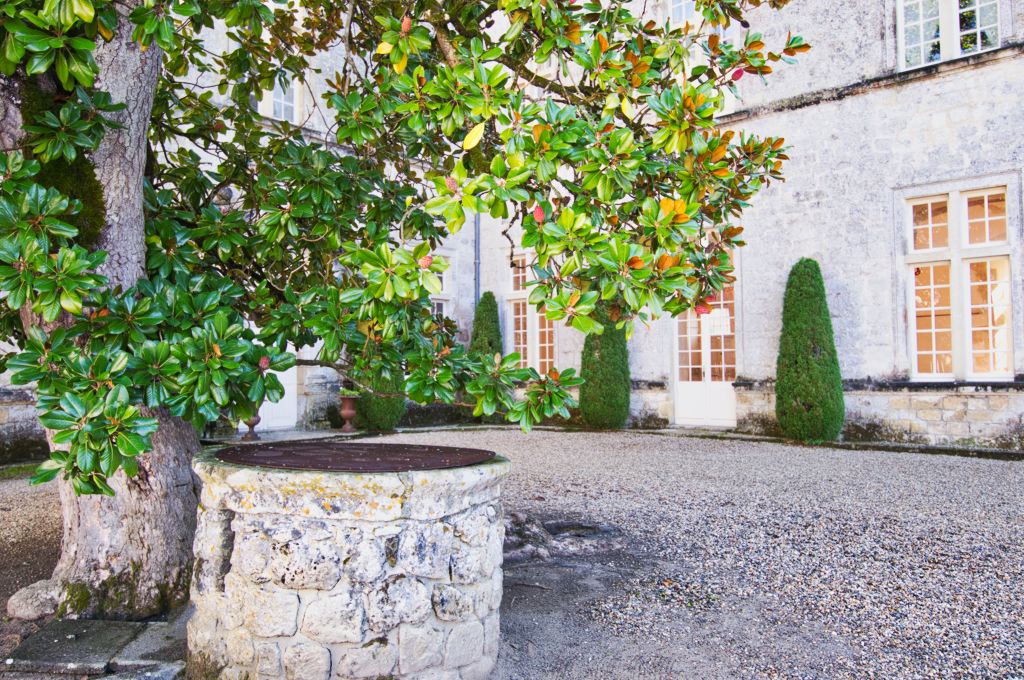 The French phrase “la douceur de vivre” is an accurate description of our time in Cadillac, known for its deliciously flavored dessert wines. We meet a local Sauternes producer and enjoyed a wine-pairing lunch at Château de Cazeneuve, a polygonal 14th-century fortress .

The Captain’s Welcome Reception, and Dinner was this evening. 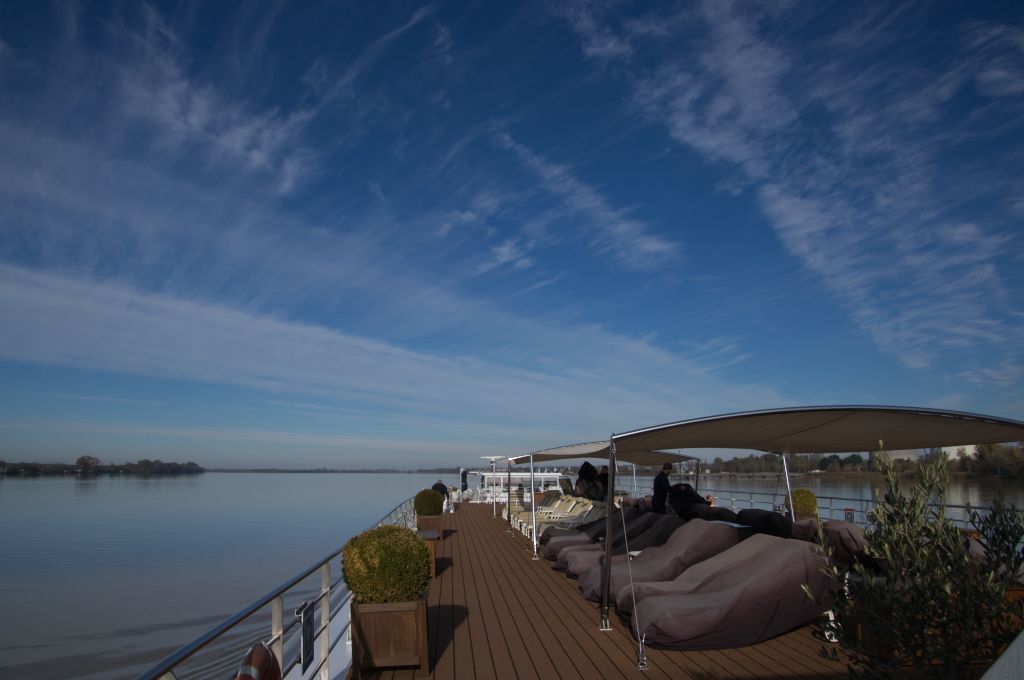 In the morning we cruised the waters of the Garonne River and the Gironde Estuary before heading to the town of Pauillac, gateway to the storied Médoc wine route and the prestigious “châteaux road.”  The legendary Médoc region abounds with prestigious wine châteaux in a dizzying array of architectural styles, as well as miles of grapevines stretching to infinity.

In the afternoon we took a scenic drive from Pauillac to the tip of the Médoc peninsula, past vineyards, including Château Latour, Mouton Rothschild and Pichon Longueville Baron, and through the villages of Margaux, Saint-Julien and Saint-Estèphe. We then  stopped at Château Lynch-Bages for a wine tasting. An interesting fact about this region was that in 1855, Napoleon III asked for a classification of the best wines in France to give visitors, 60 Médoc wines were awarded Grand Cru status, out of 61 total. 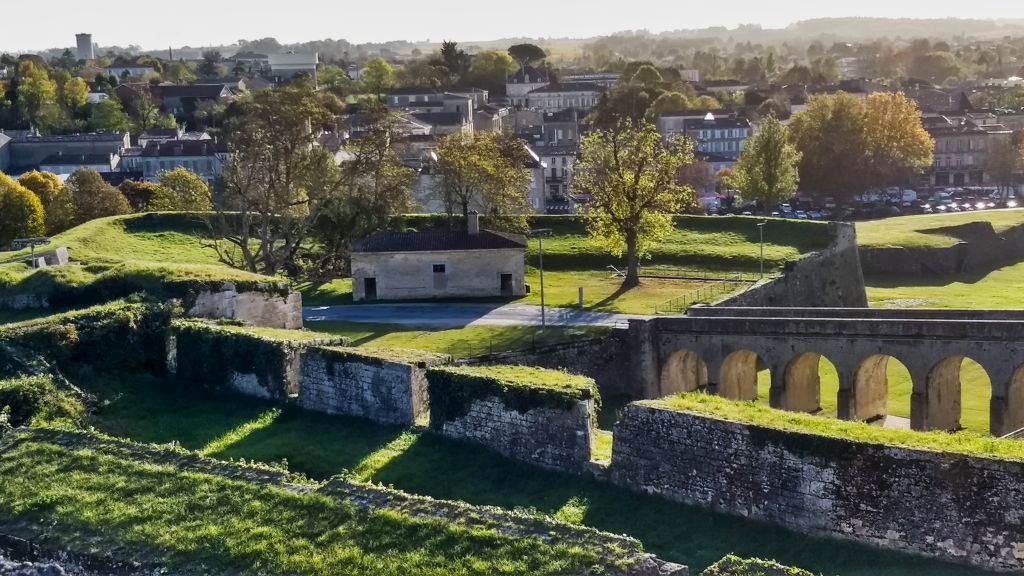 The morning saw us on a scenic drive along the Route de la Corniche Fleurie with a visit to Blaye Fortress.
This little road between Blaye and Bourg-sur-Gironde winds through picturesque hamlets with names like Pain de Sucre, Marmisson and Roque de Thau among them. There is limestone cliffs on one side, the Gironde river on the other. Fishing huts on stilts stand above the waters of the estuary, 19th-century stone houses built by sea captains sit along the road. Many of these captains traveled to far-off places and returned with exotic plants, which they planted in their gardens and along the road (hence the route’s name). But apparently the history of the cliffs extends far beyond the 19th century, people have inhabited the area for thousands of years. We returned to Blaye and took a tour through the 17th-century demilune-shaped citadel built by famed military engineer Vauban. The citadel contains the ruins of a medieval castle, houses, squares, streets, even a convent, all enclosed within stark walls.

In the afternoon the ship sailed to Bourg-sur-Gironde, which  we explored on your own. We climbed the steep stone stairs rising from the riverbanks to the top of the village for a view of the confluence of the Gironde and the Dordogne, and then saw the medieval gates and the Moorish villa. 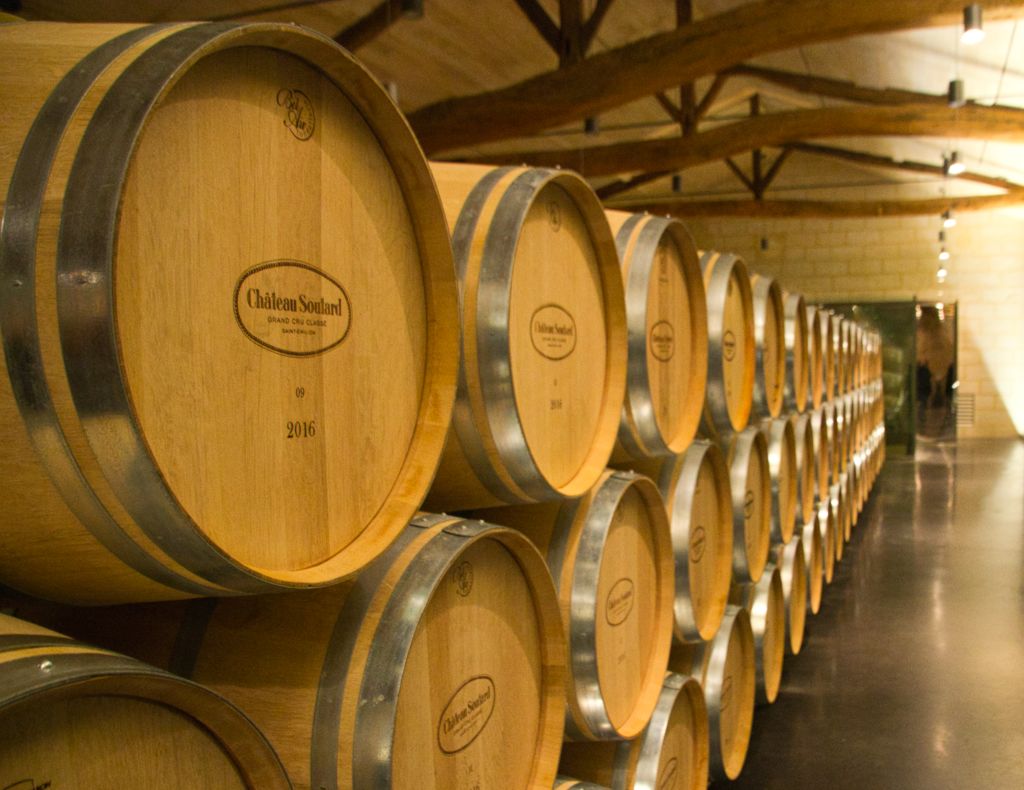 The morning saw us in Saint-Émilion taking a walking tour with wine tasting.

The hilltop town of Saint-Émilion has exceptional architecture and historic vineyards. The Romans were the first to plant grapes here, and this was the first vineyard region to be protected by UNESCO.  Of all the sights, however, the most extraordinary was the 12th-century church carved into a cliff. Only the tower is above ground, the rest of the church is subterranean. Its numerous underground galleries provided refuge during periods of strife, and include the grotto where St. Émilion, for whom the town is named, lived out his life in the ninth century. After touring Saint-Émilion, we visited the cellars of a premier Grand Cru estate where we again tasted some of the world’s most highly rated wines.

In the afternoon we just walked around Libourne. 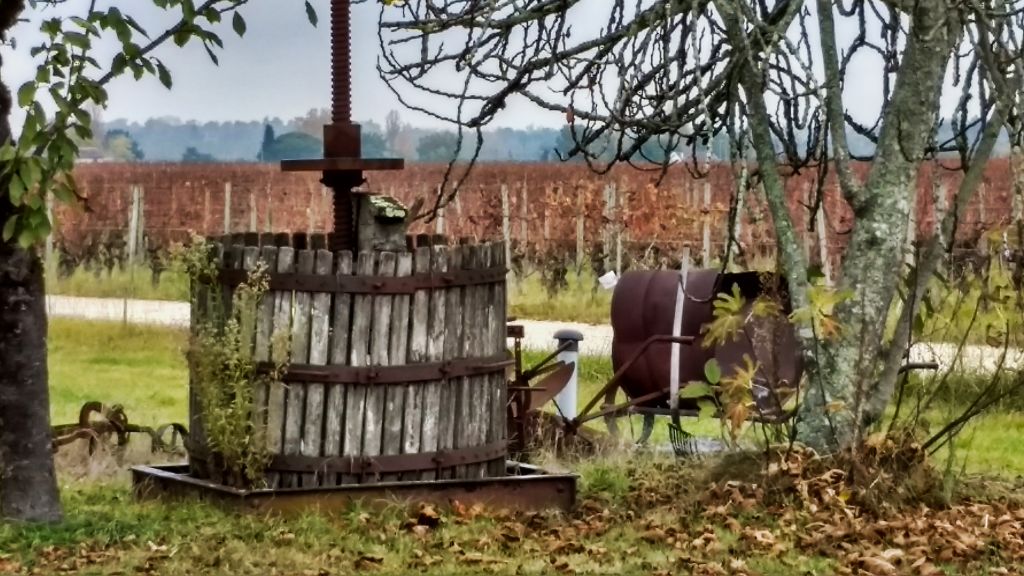 In the morning we visited a small winery run by the same family for generations. Then sailed to Bordeaux.

After dinner we got aboard an open-top bus for a view of the city illuminated at night. 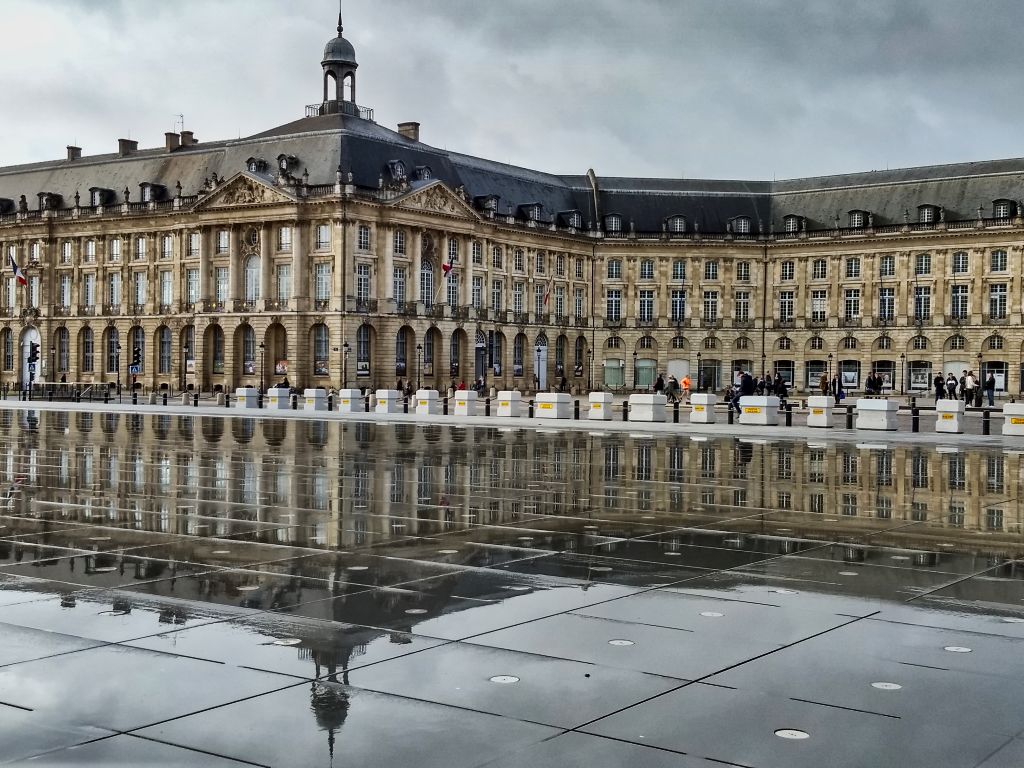 The morning we took a tram at the Quai des Chartrons to the Place de la Comédie, for a walking tour of the city.

Now for a History lesson – Bordeaux was the capital of Aquitaine in the Middle Ages and has its share of Gothic churches, it reached its apex in the 18th century.  The splendid honey-colored stone buildings from this era make up a city core that UNESCO has designated a World Heritage Site.  Trade with the French colonies built this district, furnishing vanilla, sugar, spices and cocoa to inventive chocolatiers and bakers, who used these goods to create iconic desserts. Chocolate, once a Spanish monopoly, became part of Bordeaux’s culinary heritage when banished Spanish Jews brought the art of chocolate-making to France.

The Captain’s Farewell Reception and  Dinner was this evening. 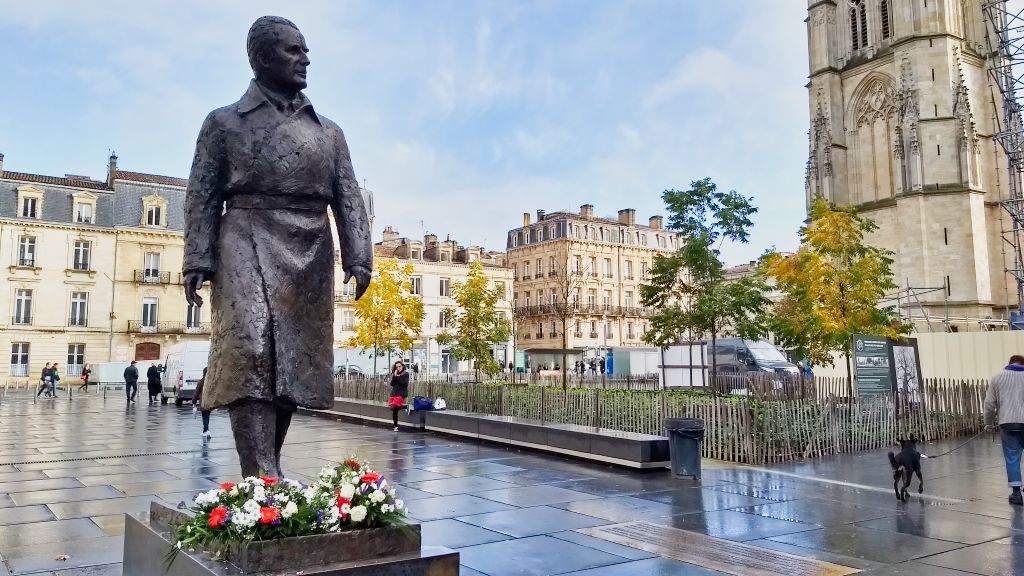 We disembarked the ship after eating breakfast. We then headed to our hotel in Bordeaux for one last night in the city.
Next day we took the train to Paris, then flight to Pisa and then train home to Lucca.
A great trip, beautiful scenery and way to much wine drinking.

(ps I stole lots of stuff above from Uniworld website. I’m a lazy writer.)

You can see more photos from trip here or from our photo gallery. 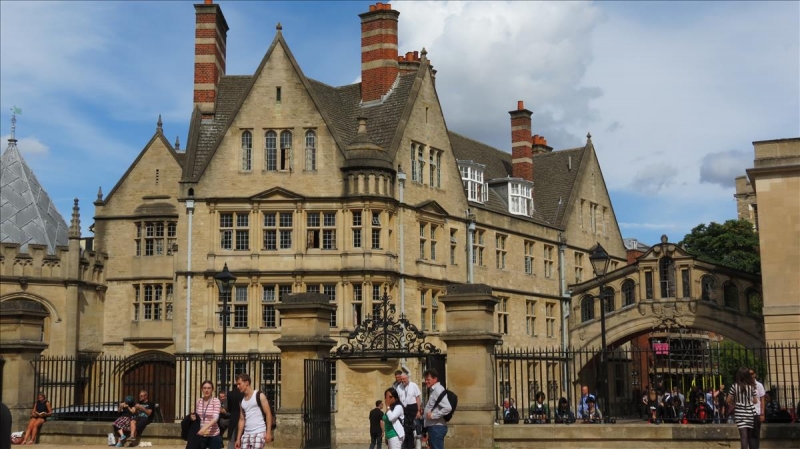 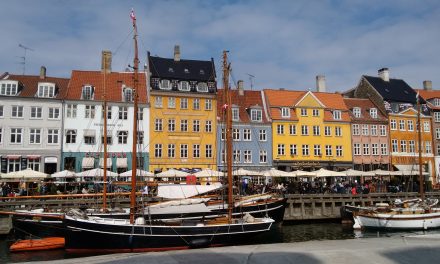 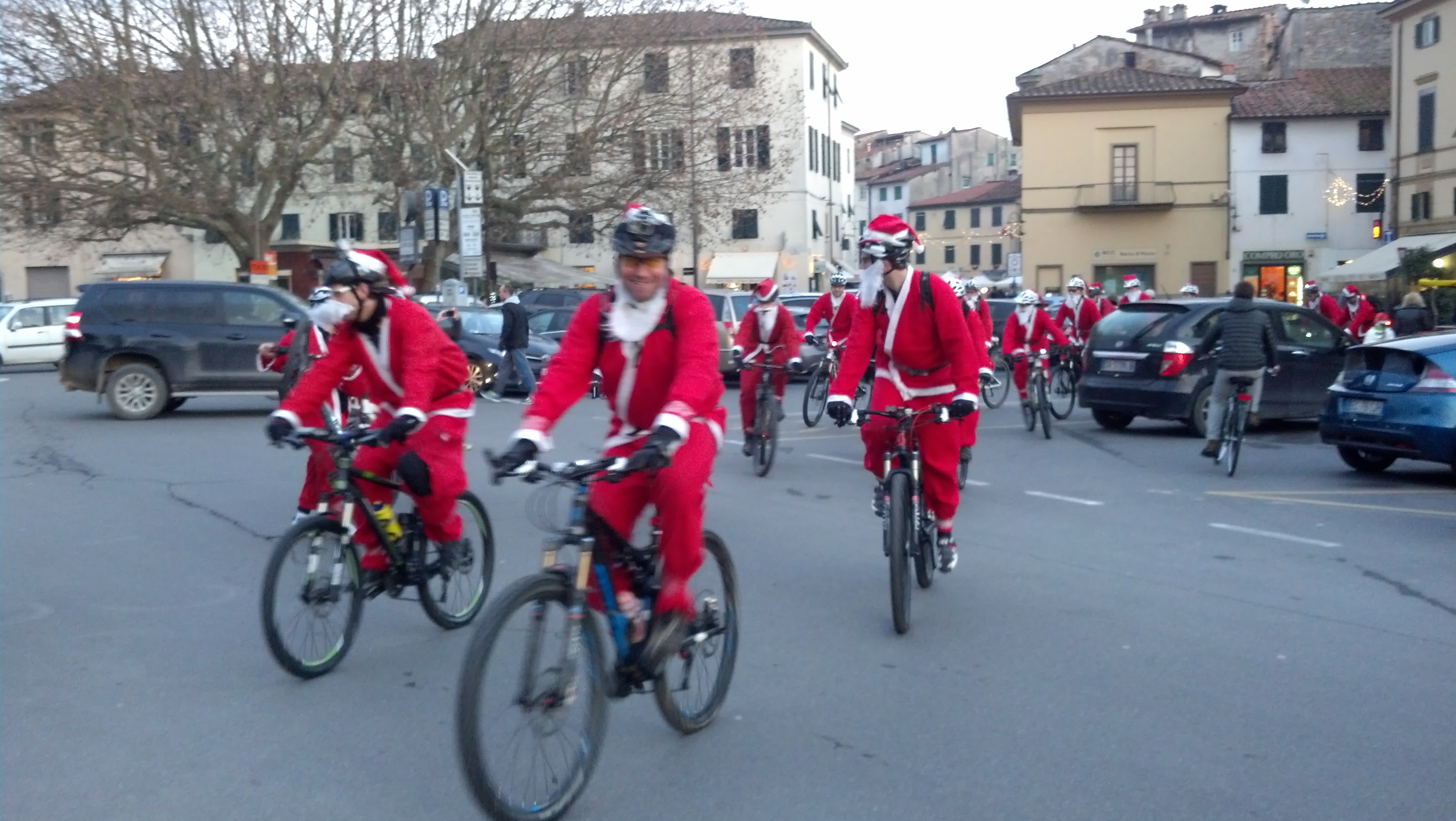 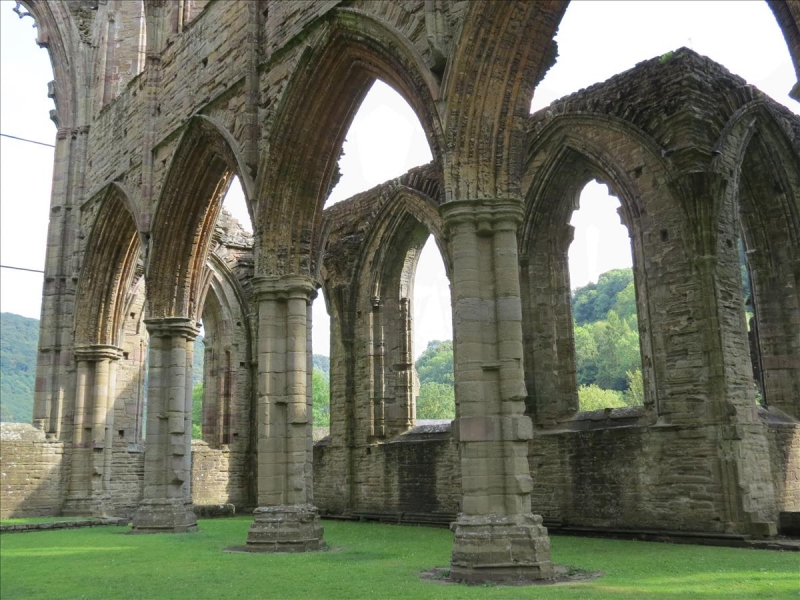